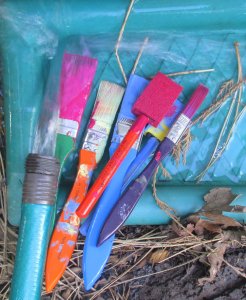 From my very first day of painting outside. The brushes alone felt like a gift of jewels.

It’s January, and I’m going to perversely write about my garden. I’ve reached a point in which gardening, painting and writing have fused for me. Each feeds off the other, and in unpredictable ways. So even though it’s months away from planting season, I’m thinking about my garden all the time.

My obsession started late last May when I left my writing behind and wandered out into my yard. I was sick of writing and all the business related to it. I’d spent years on projects that came to nothing. I doubted I’d ever return to spinning stories, and that terrified me. Who was I if I wasn’t writing something? I wandered around the muddy yard in a manic state. I had treated the space with a kind of desultory hit or miss attention since moving in here 12 years ago. My kids, when they were still small, were happiest digging in the mess, and that had been good enough for me. Now I saw the yard was narrow and swallowed inside out by invasives—English ivy, mean-ass prickly raspberries, and just plain old weeds.

Blinking like a pale mole in the sunlight that May day, I was starved for color. After years of writing in enclosed rooms and fabricating colors out of words, I sloshed in the mucky paths between my neglected raised flower beds keenly aware that I had masochistically locked myself out of my own life, the one closest to me. By largely ignoring beauty that did not relate to writing, I had done a huge disservice to beauty and me.

“I think it pisses God off if you walk by the color purple in a field somewhere and don’t notice it.” ― Alice Walker, The Color Purple

I began ripping out weeds and hauling in seeds and flats of searing bright annuals—zinnias, cosmos, petunias. If a color made me happy that was enough. I had no plan except to not let myself overthink it. One morning I needed even more color, so I went out and bought gallons of used paints from the Habitat for Humanity Restore. I needed something to put it on, so I hauled old wooden bed frames and chairs from the garage. 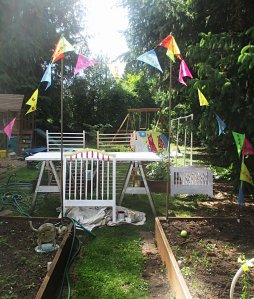 Getting my canvas (old furniture and the garden itself) ready for what would come next.

I was euphoric but also frantic, afraid that I would kill my own impulses and newfound joy if I stopped moving or made the process too complex. So much of what I’d written had not added up to anything tangible because the process had become so intricate. Book drafts take years, rejection takes its toll. I had learned much from the close, hard work and been deeply transformed by the process, but I was depleted. As I started throwing down paint and squeezing in more flowers, I began to grasp that those people who work with colors and textures of all kinds experience constant, immediate flashes of adrenalin and grace to the heart. Reading and writing, my life’s blood, no longer offered me the same thrill. The pursuit of art takes discipline, and the results are stunning and crucial, but you can rewrite your work and yourself to numbness. I had become perilously numb, and the only way back to myself and what the world wanted to give me was through my hands and eyes and the dirt outside my back door.

By June, I was crawling out of bed each morning as soon as it was light and heading into the yard to play. By dark, I’d collapse exhausted, covered with paint and mud, and breathing deep. Just like a kid.

My next series of blog entries will elaborate on what actually happened when I dove with little planning into creating with my hands instead of with words.

Book recommendation: Starved for words infused with flowers and color?  Go child-like and try The Gardener by Sarah Stewart and illustrated by David Small 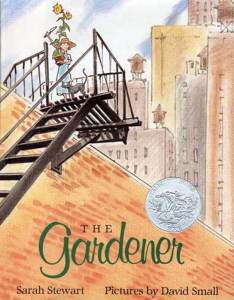