Since finishing my novel, The Divided Daughter, I’ve left my characters to their own devices–at least until I figure out the next step toward publishing it. While my book people are off piecing together clues in China or steering a boat through wild water on Lake Superior, I work on children’s stories, poetry and short fiction. I research my next book! 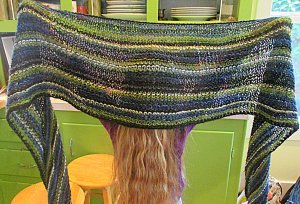 A new finished piece. Wide wingspan with silk. The white lines are made with yarn that belonged to my grandmother.

Some of my new writing fuses knitting and fairy tales I read at the city library when I was a girl. One of my favorites is “The Six Swans,” a Brothers Grimm tale about a sister who must save her brothers from a spell that turned them into swans. Her task is to make shirts for each before time runs out or they will remain forever as birds. I imagine her knitting day and night. No matter how hard she tries, it won’t be good enough because she can’t finish in time to completely cover her last brother. Five of the brothers escape whole but the last boy will have no choice but to live on with one wing.

That seems the haunted nature of writing, how we work while sleeping and waking on a story that seems life or death yet despite how far we push ourselves or our skills the story has to be released before absolutely perfect. Knitting, I realize, helps me cope with the regret while also moving forward into the next piece. In my hand I can hold one long, reassuring string that seems to tie together all my effort over time. I’m reminded that it’s the actual doing not the idealized vision of a finished piece that yields the most in the end.

For more writers’ thoughts on knitting and writing, I recommend Knitting Yarns, Writers on Knitting, edited by Ann Hood and replete with pieces by knitting authors Barbara Kingsolver, Andre Dubus III, Jane Smiley and many others.

Here’s one of my own knitting poems. It was published in Zyzzyva:

On Reading His Obituary
–Kathlene Postma

Don’t make much of it. The boy
with one wing, the one you could not
have. That was thirty years ago,
when your father was still alive.

You could not knit fast enough
to find a way out. As if time wouldn’t
do you the favor of unraveling
the boards from the walls of the very

room where you waited for the boy
to crash in, feathers flying. There are
all kinds of sad, and pretty much every
one will come for you, by newspaper,

by mail, by way of your mother’s mouth
after she hangs up the phone.
In the book of patterns there are knots
so hard to follow you must put your sticks

aside and read aloud the code, imagine
the yarn seizing hold of itself,
a conspiracy of beauty strong as a rope
to throw to the boy with one hand

who stands down in the yard where you
no longer live. As if he could pull you
out of this life or you could take him
back from the next.

2 thoughts on “Knitting Stories: A conspiracy of beauty”