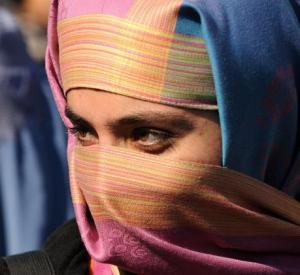 I went in to this rare opportunity to mentor women writers in Afghanistan with some nervousness. What could I offer women under such stress? These are women who the newspapers tell us cannot leave their homes unattended by a male relative, who are for all intents and purposes ghosts in burqas. Their schools are gassed by militants who don’t believe a girl should get an education. Their villages are sometimes bombed by our own military. They have lost too many of those they love.

Their stories and poems came to me in my email box, bit by bit, draft by draft, often with a thank you to me for my critique. Some of the pieces were so painful to read I had to go for a walk before I could answer. How to approach revision? Every word seemed precious. I finally took a deep breath and worked slowly through each piece. While offering suggestions I felt for the heart of what each writer was trying to say in English, a language that is not her first and in some cases second and even third.

What I had not anticipated was the writers’ often wry delivery of ironic moments in every day life. Some of writing they shared with me and the other women in the online class was so optimistic and humorous I smiled and imagined the face of the writer, what it would be like for all of us to sit together sharing our work and laughter. It seemed easiest if I could envision a table much like where I sit with my writing groups or with my students in the US, a place where the writing and being together is the most important thing. For short periods of time we shut the door on what we cannot control to focus on what needs to be said and said well.

What is the number one thing these women writers want? An education. For many that opportunity exploded, literally, when first Soviet and then later US forces moved into their country. They fled from war into Pakistan. Some of them kept going to school as refugees in Pakistan, but it was a cobbled together education. When they could return to Afghanistan, they had much to make up. There were not enough schools for girls and it was often dangerous to go.

One of the biggest obstacles to learning can be found in their homes. The women write about trying to persuade their fathers to let them go to school. In many cases they have to convince their brothers, husbands, uncles and even their mothers. They write with affection of fathers who saw in their daughters the dream to learn and sacrificed so they could go to good high schools and even—the dream of all dreams–to study abroad. They write of losing their fathers to opium addiction, torture and murder by the Taliban and of fathers who have died in the war. Without fathers they cannot afford to go to school. They face extreme poverty and arranged marriages that close the door on the possibility of college. These women remind me how a father can make or break a girl’s future, of the profound responsibility a man bears to do right by his daughters by supporting and respecting them.

I had not–but should have–anticipated the intense courage of these women, how hard they are fighting for their futures and the sheer force of their will to not only survive but succeed and change the face of Afghanistan.

Visit awpproject.org and open one of these writers’ stories or poems. Imagine these women are at your table or you are at theirs. Listen and answer.

Many of us stand helpless in the face of this war and can only watch while others pay a profound personal price. We see women around the world who suffer brutally for no other reason than they were born female, and we feel we can do nothing.

But we can read. We can respond through the Afghan Women Writers Project website. Anyone can open the stories by Roya, Sofia, Ellaha and the other brave writers. Anyone can tell them to please keep writing.

AWWP has made me hope we can create a conversation that crosses over this vast killing divide and the misunderstandings that are costing lives and livelihoods. We can connect as writers to writers and people to people. This is the kind of dialogue many of us know is the answer.

——-
Masha Hamilton, founder of the Afghan Women Writers Project, an award winning novelist and journalist, will be a visiting writer and guest speaker at Pacific University on March 3, 2011. I have so many questions for her when she is here!

One thought on “What I’ve Learned Mentoring Afghan Women Writers”